She knew nothing about the power of yoga when she took her first class, but the experience would lead to a life-changing revelation for Janine Gustafson. “I wasn’t a workout person at the time, maybe 15 years ago or so,” Gustafson remembered. “But I heard about this yoga class and, although I had no idea what I was doing, I was curious to find out what all the excitement was about.” 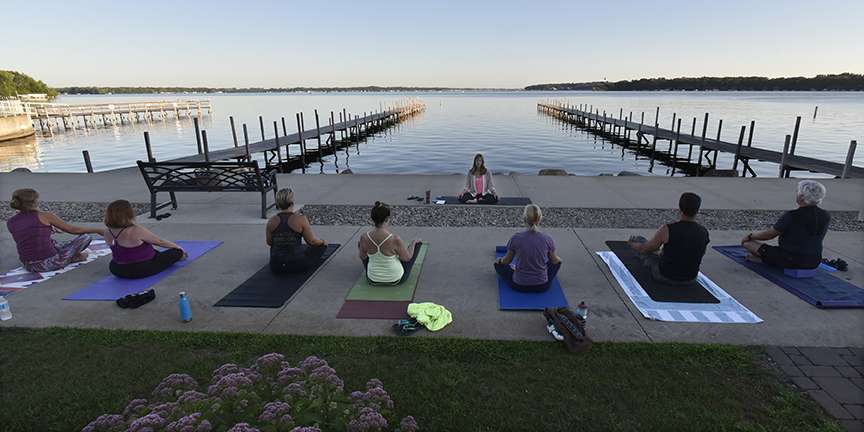 Gustafson attended that first class, taught by Michelle Parks, and it struck a chord. In 2003, Parks sent Gustafson to Mankato, Minnesota, where she earned 200 hours of training in the art of yoga. “It was eye-opening for me,” Gustafson said. “It was more than the great physical exercise, it was also mentally refreshing.”

Armed with a strong will and a tiny 10-foot by 20-foot space at The Stables, Gustafson opened her own Yoga Okoboji studio in 2004. Parks joined her as an instructor and helped grow the patron base. The studio expanded, and Gustafson and Parks continued to build their training resumes’ 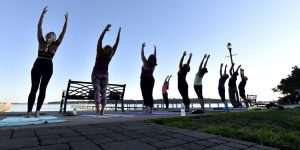 Gustafson’s dream of opening a state-of-the-art studio came true in 2015, when Yoga Okoboji moved into new digs on Zenith Avenue in Spirit Lake. The facility is completely solar powered, including radiant heat floors and the ‘hot’ room. “It was the opportunity to become earth-friendly,” Gustafson said. “We capitalized on the use of natural light.”

Gustafson now employs seven teachers with a combined 50 years of yoga experience, conducting daily classes at the studio and beyond. “Summertime, of course, is the busiest, so we conduct classes beginning at 7 AM outdoors at the beach or nearby at the Arnolds Park Amusement Park, and studio sessions begin at 9.” Although class sizes diminish in the off-season, Gustafson said there is a faithful group that attends throughout the winter.

As someone who has “hit a place of intrigue” with her own experiences, Gustafson was quick to point out that yoga can be enriching for persons of all ages and physical conditions. “The average age here is probably around 35, but we teach teenagers and octogenarians,” she said. “Don’t be intimidated, it’s not a competition. We tell them to listen to their bodies, that there is something for everyone. It’s cool to see families and couples together here.”

At 45, Gustafson seems focused more on the mental perks of the art now. “I guess it’s more of consciousness thing,” she mused. “When you have control of your mind and thinking and how you want to live, it’s a good thing. If the body is healthy, the mind is free.”

Visit www.yogaokoboji.com for details in how to become involved with yoga classes.