” ‘Okoboji Phatnoms:’ A look at businesses and other places of intrigue in Okoboji’s Past” 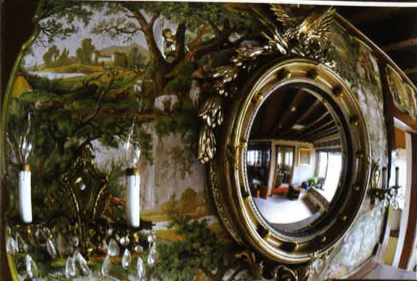 Always there has been the banter about its supposed sultry side. It was a bordello, one rendition claims. Or perhaps a verboten gaming hall, says another. But these are just contrivances at best. Whatever the conjecture of it storied past, the indomitable Chateau- that distinctive and historic structure guarding Givens Point on West Lake Okoboji- is one of the signature treasures of the Iowa Great Lakes.

Owned for the last decade by Greg and Dorothy Sloma- and their daughter, Meghan and son, Brian- the Chateau shows off the signs of loving stewardship. Never has the singular home stood so proud, shimmering in a lovely rebirth. The Sloma signature is replete in detail, and the century-old Chateau wears the attention glamorously.

Dorothy, on Arnolds Park native, grew up on her parent’s lakeside acreage on Upper Gar, and Meghan and Brian have fond memories of summers at the lake. The family had been looking for their own summer retreat, and when the Chateau became available it seemed like destiny would have it be theirs.

Situated on an eye-popping, lake-level lot that sprawls 220 feet, the home commands a riveting view of the lake. Only its intriguing history is more compelling. The Slomas are the eleventh family to own the property, the first being Milton Smith in the summer of 1866. Exactly when Smith sold a parcel of his Des Moines Beach holdings to Judge Josiah Given (thus Givens Point, so named later) is unclear, since record keeping was an inexact science in those days, but a compromise date would be 1886. Many other family ownerships followed, but none have been as meticulous caretaker of the fabled real estate as the Slomas.

According to Meghan Sloma, the family’s main focus, upon acquiring the property, was to turn the Chateau back to its original state as a family summer lake home. “It was a daunting undertaking at first,” Sloma said. “There were years of disrepair that to be addressed and just lots of layers of drapes and carpeting and paint and junk that had to go.”

The process alone, of stripping the house of years of cover up- and such things as rediscovering pine plank floors- took about two years. Choosing a color palette- given the odd morphing of purple and pink and other tinctures the home had endured throughout its history- was the next challenge. “We settled on forest green and rust burgundy,” Sloma explained, “and decided that color theme should resonate throughout the interior and exterior.”

Another major project was removing a temporary kitchen from the 1970s and constructing a large, modern kitchen in its stead, building a gas cook top into an antique library table. The wood-work and walls were returned to original 1940s colors.

Greg and Brian rolled up their sleeves and got to work jacking up the center of the home to reconstruct broken down floor joists, and replaced countless yards of aged plumbing.

There was no shortage of windows in the Chateau, adding to its allure as a lakeside dwelling. Problem was most of them didn’t work. “Years of paint and neglect made it impossible to even open many of the windows,” Sloma said. “Mom and Brian removed each window and sanded, cleaned, caulked, planed, primed and painted them all. Then, because none of the windows had screens, they handcrafted frames and screens, including a handmade ornate screen door for the curve-top front entrance on the street side, It was such a wonderful transformation, because now we could enjoy lakeside breezes throughout the house!

Then, painstakingly, each room in the home was resorted to its original condition, and the loveliness of the quintessential lakeside home was returned tot he Chateau. Outside, a new roof, patio door, windows, concrete steps and off-street parking were constructed.

“Finally, after ten years of work, we started to feel like the major projects had been checked off our list, but it is- and probably always will be – a work in progress,” Sloma said. Less burdensome projects, but ones aiding in the fine-tuning of the property- like repairing the exterior stone wall and repainting the outdoor canopy- are ongoing.

After a decade of labor and love, the Sloma restoration is stunning. They have recaptured the Chateau’s magic and enhanced it. The project features six bedrooms and two baths upstairs. The living/kitchen/bar area, a magnificent 50-foot L-shaped front porch that affords views of sunrises and sunsets from the same chair and two baths grace the main floor. Warmth and attention to detail emanate from all corners.

“The Chateau is a piece of history that needs to be preserved,” Sloma said. Mission accomplished. Touring the home is like stepping back in time.”