When an angler catches a walleye in the Iowa Great Lakes, it’s a safe bet that fish’s life began at the Spirit Lake Fish Hatchery. Surprised? Most folks who reel in one of Iowa’s most sought after game fish are, but the fact is that an annual spring ritual performed by the Iowa Department of Natural Resources (DNR) sustains the walleye fishery here and statewide.

Mike Hawkins, DNR fisheries management biologist for the Northwest Region in Spirit Lake, says the gill netting tradition is the lifeblood of quality walleye angling in Okoboji and other sites in Iowa. “Natural reproduction of walleyes in the state is minimal,” Hawkins said. “Our gill netting projects are what sustains the fishery.”

Soon after ice-out in the spring, on average around April 8 – when water temperature and photo period (hours of daylight) are optimum for walleyes to spawn – DNR crews assemble on six of Iowa’s premier walleye waters to propagate the species. Here in the Iowa Great Lakes the targets are Big Spirit, West Okoboji and East Okoboji lakes. The others in the assembly are Storm, Clear and Rathbun lakes. 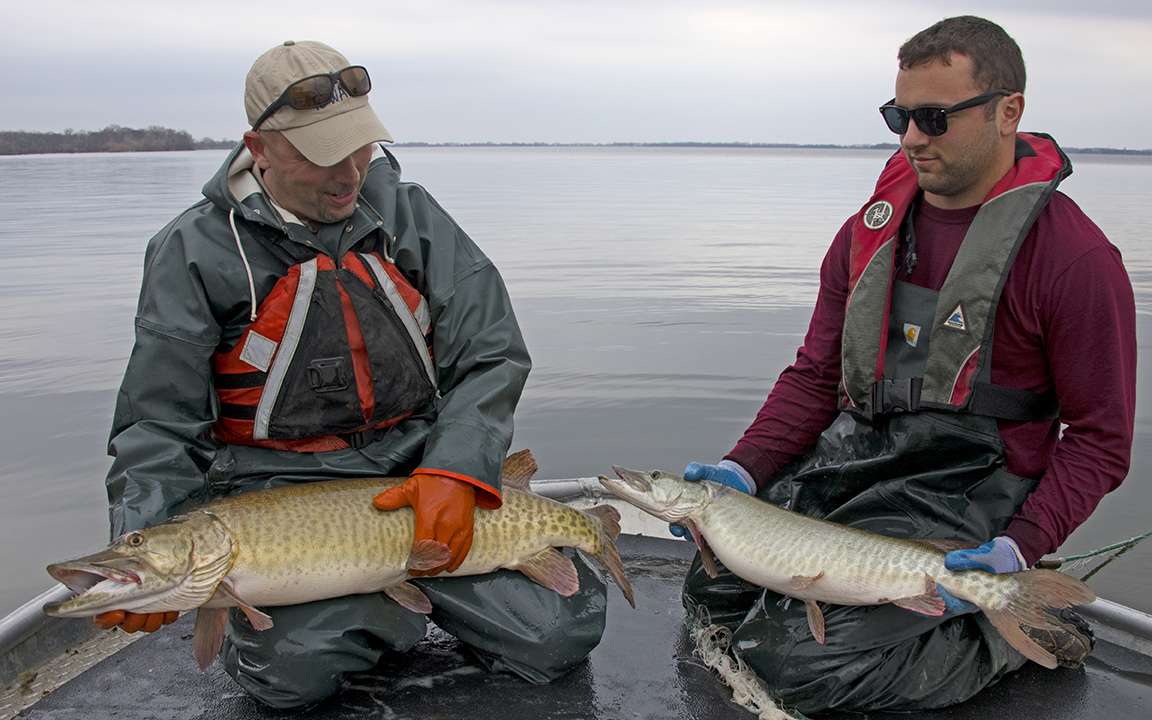 Two to three-man teams of DNR biologists and technicians board large jonboats and begin setting gill nets along typical shoreline spawning sites just prior to sunset. The nets are staked at shore and run 320 feet into the lake. Crews then run the nets twice after dark, documenting the entire catch and releasing all fish except walleyes and muskies, which are kept aboard in 100-gallon aerated tanks.

After the final run, the walleyes and muskies are taken to a boat ramp, transferred to tanks aboard trucks and transported to the fish hatchery at the south end of Big Spirit Lake. DNR personnel count the catch and separate males from females into separate tanks and further separate ‘green’ females (those not ready to spawn) from ‘ripe’ females (those ready to spawn).

The next morning, the ripe females are stripped of their eggs, which are then fertilized with male sperm and hardened for four hours in a water solution. The eggs are then transferred to incubators for an average of 18 to 20 days, when they hatch to larval fry. Typically, 100 million eggs are produced from the lakes area gill net project, 80 percent of which will hatch successfully. 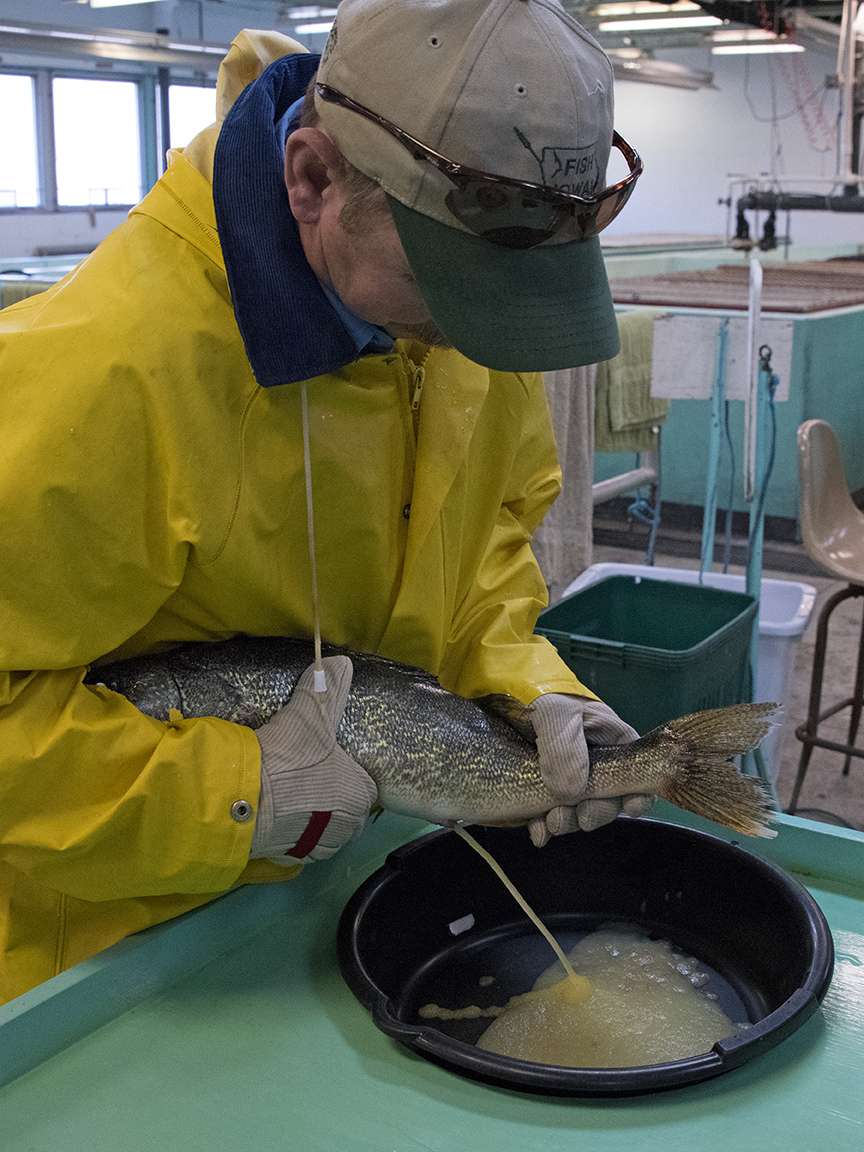 Kim Hawkins is the manager of the Spirit Lake Hatchery, and she is given a target number of walleye fry and fingerlings that must be produced to meet the requests of fisheries biologists across the state. In a typical year, 100 million eggs are collected at Hawkins’ hatchery. “With 140,000 eggs per quart, the site produced 600 quarts of eggs in 2018,” Hawkins said. We also received an additional 500 quarts from Storm Lake and Clear Lake.” That translates to a mind-boggling 1,100-quart production. 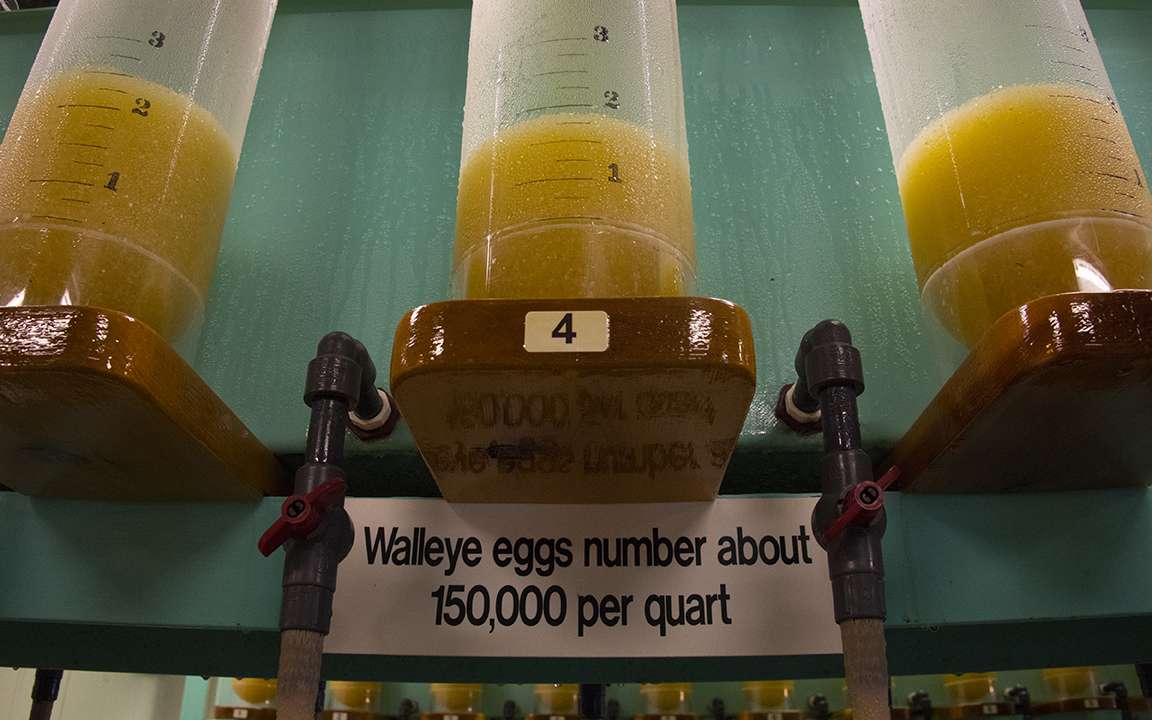 The bulk of the successful hatch is then trucked across the state and stocked in many of Iowa’s water bodies, sustaining the walleye fishery that would otherwise be minimal. There is very little natural walleye reproduction in Iowa lakes, and virtually none in its rivers, due in large part to a loss of habitat. Walleyes prefer clean, aerated cobble areas to spawn in, and most of that has been lost to sediment loading, siltation and algae blooms.

Another portion of the successful walleye hatch is taken to Sunken and Welsh lakes in Dickinson County where they are raised to two-inch fingerlings. Those fish are then transferred back to the hatchery where they are intensely raised to different sizes of fingerlings, which ultimately end up being stocked in Iowa waters.

The next time you enjoy a successful day of walleye fishing in the Iowa Great Lakes or elsewhere in Iowa, give a tip of your cap to the DNR fisheries biologists and technicians whose work each spring preserves the life cycle of this favored fish.