“Okobojian Denny Anspach and his family own a fleet of classic wooden boats that they have restored an preserved over the years.”

Awestruck by the beauty and timelessness of the classic wooden boats, Denny Anspach began a lifelong love affair with the nautical treasures. In farmsteads, fields and boatyards from New Hampshire to Lake Tahoe, Anspach discovered abandoned and abused wooden boat relics and with tireless patience and love rehabilitated them into museum-quality crafts. 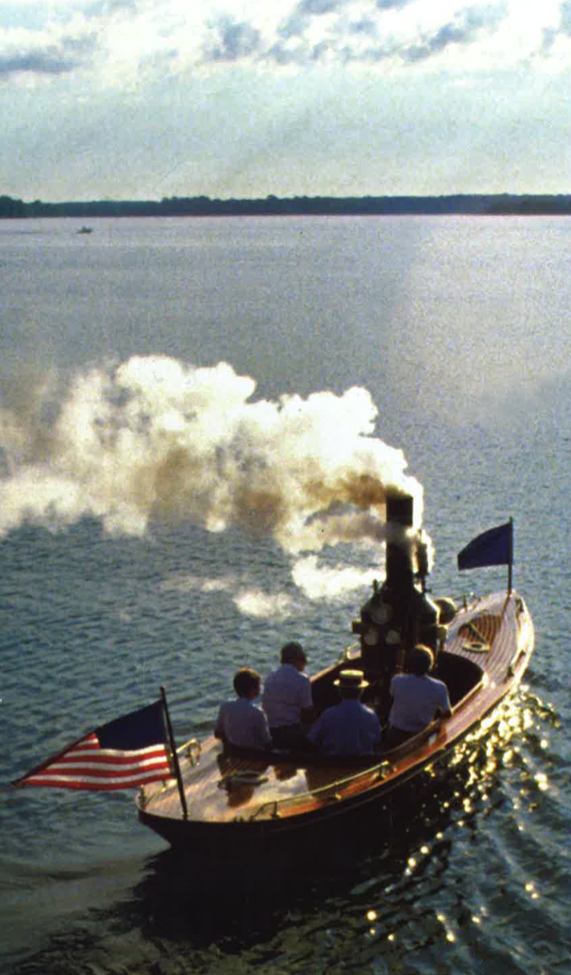 The trademark of his maritime memoirs will be the mahogany-flanked, classic wooden vessels of yesteryear that still, under his careful preservation, navigate the water of West Lake Okoboji like a walt. Built from the flesh of exotic trees, these boats are of singular beauty. Distinctive even at dry dock, on the water they are truly visions of elegance. Discerning them is like witnessing fine art; riding in them is like floating in a history book. Classic wooden boats- crafted in varnished mahogany decades ago, with traditions traced to New England, the Great Lakes and even Okoboji- are a passion of Denny Anspach and his family of Okoboji.

On a postcard-perfect summer day not long ago, Anspach searched the rich red flanks of his newest restoration project with tenderness, his strong hands caressing a piece of maritime history. Once reduced to a wholly dismantled pile of wood, the classic 1947 Christ Craft- the first of many such boats to be owned by his family- is being painstakingly fashioned back to its former glory by Anspach and his son-in-law, Kenneth Smith. Bought at Wilson Boat Works in 1949 by Anspach’s father, William, the craft is especially unique. Unlike most of the other production boats of the time that were built of Philippine mahogany, this vessel was crafted from Cuban mahogany, not a stick of which was imported to the U.S. after World War II. The bottom of the boat is constructed of Port Orford cedar- the finest and most valuable boat wood known to man- from a rare tree that grows in the interior coastal valleys of northern California and Oregon.

So meticulous is the restoration that it has been ongoing for 20 years, after the Anspach family quit using it in 1982 due to its deteriorating condition. Once completed, the boat will bear a name- to be determined by the children in the family- in gold lead on the side, not the transom, in the New England tradition. “But I have veto power over the name,” Anspach laughed. “The name must be appropriate, distinctive and historical.”

Anspach, who was born and raised in Chicago, has lifelong ties to Iowa and the lakes region. His mother first visited Okoboji in 1906. The extended family has roots to Okoboji dating back to 1935, and he and his wife, Carol, and his brother, William, still share the same home they purchased in Haywards Bay on West Lake Okoboji in 1952. The brothers Anspach both worked at a boat shop in Chicago where they nurtured a love for all things nautical. Their foresight for cherishing maritime artifacts is evidenced in the 1946, 22 HP Evinrude outboard- their very first- that holds a place of distinction among their keepsakes.

Awestruck by the beauty of timelessness of the classic wooden boats, Anspach began a lifelong love affair with the nautical treasures. In farmsteads, fields and boatyards from New Hampshire to Lake Tahoe, Anspach discovered abandoned and abused wooden boat relics and with tireless patience and love rehabilitated them into museum-quality crafts.

One of Anspach’s fondest restorations was to a 16-foot Hafer runabout that he refurbished from the group up. “It’s the finest Hafer around,” Anspach said of his craft, one of perhaps 15 originals still in existence that were built by John Hafer and his son, Glen, at a small boat works in Spirit Lake. “Glen Hafer was a master boat builder.”

The early Hafers were of the old double-end design, then in the 1920s the father-son team began producing more deluxe launches, and in 1927 the first all-mahogany run-about speedboats were constructed. During that era it was not uncommon to see Hafer Craft boats- including smooth-sided fishing boats, outboard runabouts and sailboats- dominating the navigational scene in the Iowa Great Lakes region.

During his many years of showing boats in New England, Anspach’s Hafer won the highest point total he had ever earned- 98 of 100- at a national show in New Hampshire in 1983. He spent five years as a chief judge at national shows in both Lake Tahoe and New England during the ’80’s, retiring from the circuit in 1991.

Another of Anspach’s proud collection is a classic 20-foot Hacker Craft runabout that he bought in Lake Tahoe and dismantled and restored. “John Hacker was the most well-known marine architect of small planing boats, ” Anspach explained. “Ours is a John Hacker creation, one of three original Hackers on West Lake Okoboji. It is fast, silent and a true piece of art.”

A favorite craft of the Anspach family is 1926, 29-foot Fay & Bowen wooden launch built at Seneca Lake in the Finger Lakes area of upstate New York. Denny found the forgotten vessel in a field in New Hampshire and William restored it in Florida and christened it “Ragtime.” By serendipity, the brothers found the original engine to the Fay and Bowen and had it restored. “It is a boat of dignity,” Anspach said.

The boat that receives the most fanfare among Okoboji antique boat lovers is William’s custom-built fantail launch, with a deck of inlaid Honduran mahogany, a black-and-white tile firing floor and a polished steel open-air steam engine that is fueled with coal. “William built it to represent the finest Edwardian workmanship,” Anspach said. “The concept of line and design is breathtaking.” The steamer is named “William Sykes” after Anspach’s uncle who embraced the Okoboji boating traditions with his nephews.

Will Anspach find another forgotten relic to add to his fleet of wooden marvels, a collection both eclectic and spectacular? “Probably not,” Anspach said, “although you never know- the work is a labor of love and help keep me young.” And it adds to the sustaining beauty of Okoboji’s maritime lore.