Travel with the Time Machine back to the 1850s, when the first settlers, immigrants and adventurers were arriving in the Okoboji area. Their eyes beheld what their Native American predecessors had first witnessed- a land of irresistible beauty and a chain of lakes that held them breathless. 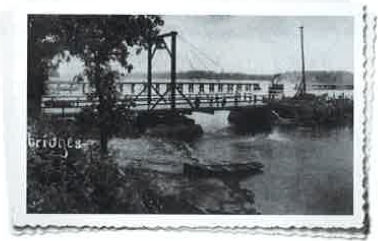 Travel into the area was largely achieved by horseback and covered wagons. Only the crudest of roads were being carved into the area at the time. Boats, railroads, automobiles and two-lane roads were still on the horizon, thus travel through the region was challenging.

As the number of settlers increased, so did their needs, and one of those was quick and easy access across two narrow straits. One was just east of the town of Spirit Lake on East Lake Okoboji.

The other was a point of land jutting out into the water that formed a natural separation between the East West Lakes. Today it is the grade and bridge over the channel that separates the lakes, over which thousands of travelers ride daily on U.S. Highway 71. But to the early settlers it was only a spit of land reaching to the shallows- marked with cattails and bulrushes- and the channel. How did they ford that artery to avoid having to travel around one or the other of the lakes to reach a point north of south of the narrow strait? They swam teams of oxen across it, with wagon boxes floating behind. Necessity was indeed the mother of invention.

It would be the first bridges that first fostered the imaginations of builders and spanned the routes to modern travel in the lakes area.

By 1860, the first two bridges authorized by the Dickinson County supervisors were completed at the Spirit Lake and Arnolds Park/ Okoboji sites, each constructed on trestles set 16 feet apart, with a main span over the channel 30 feet in the clear. These bridges were rebuilt several times (historical accounts are conflicting) beginning in 1874, with improvements such as grades and approaches at either end that were filled over existing sand bars.

It was in 1882 that the Chicago, Milwaukee & St. Paul Railroad brought passenger train traffic into the area, a pivotal event in the evolution of modern transportation. A crew was brought in to build the long trestle that crossed East Lake Okoboji adjacent and parallel to the natural roadway. A swinging span was added to the railroad bridge when boat navigation began from lake to lake.

In 1909, the Dickinson Supervisors approved the construction of a steel bridge by the Clinton Bridge and Iron Works. That bridge was replaced by a concrete structure in 1929, and a year later U.S. Highway 71 was paved.