Spine and loop trails draw cyclists to the lakes

In 1988, a new RISE initiative funded by the Iowa Legislature provided $1 million annually for the development of recreational trails in Iowa. From this start was born the Dickinson County Trails Association (DCTA), which won a grant the following year for $357,121 to build the spine trail. In 1990 a second grant for $133,920 from the Iowa Department of Transportation was awarded for the construction of the bridge between Lower Gar State Park and Henderson Woods.

The 14-mile hard-surfaced spine trail – for biking, roller-blading, running, walking and cross country skiing – was constructed through the heart of the Iowa Great Lakes and connected the cities of Milford, Arnolds Park, Okoboji and Spirit Lake. Sixty miles of signed biking routes were further added that looped from the spine trail over low-traffic county roads for a more challenging ride through the rural countryside. 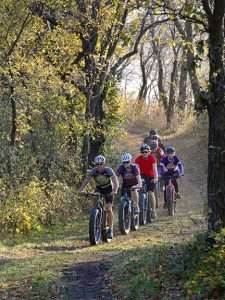 In 2006 the DCTA was reorganized and re-christened the Dickinson County Trails Board. Since then, the county has added more than 100 miles of dedicated recreational trails, county bike routes and railroad rights-of-way trails to the original spine and looping tour trails.

Hard surface routes have been added along the west sides of both West Lake Okoboji and Big Spirit Lake. Trail loops have been established around the east side of Big Spirit where it now joins the Loon Lake Trail of Jackson County, Minnesota at Mini-Wakan State Park.  Two new trails now meander up the west side of West Lake Okoboji, and a new trailhead has been established along Highway 86 at Wahpeton. Two tunnels under Highway 86 opened the new Harbor Bay Trail.

Trails executive director Jean Martin says the DCTB has constructed and renovated more than $4 million in trails and secured $3 million in local, state and federal grants over the last several years. A regular maintenance and renovation schedule is in place to keep the trails relevant.