“The Story of the O’Farrell Sisters restaurant can’t be served without a few special ingredients- two generations of independent, industrious women, a seasoned boat captain, a missing railroad ledger and pie that won’t be served before its time.” 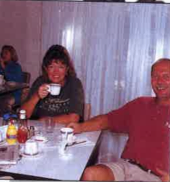 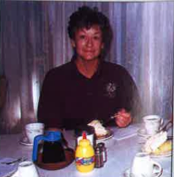 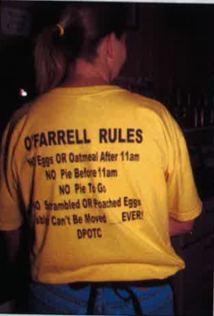 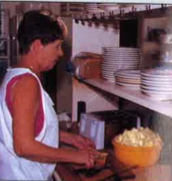 O’Farrell Sisters has been an Okoboji legend since 1948, when it was originally located on the northeast corner of the bridge linking West Lake Okoboji with East Lake. Until the recent reconstruction of Highway 71, the same site was later occupied y Harold’s Fisherman’s Wharf.

The restaurant had a humble origin when the three O’Farrell sisters- Edna Mae, Arlene, and Fern- began serving sandwiches to hungry friends. A close family friend, Betty Heldridge, also worked at the restaurant during its first five years. The bustling restaurant had crowds for breakfast, lunch and dinner, and it became a popular first stop for summer residents as they returned to their lake cottages.

O’Farrell has been a well-known name in the lakes area since the aryl pioneer days of 1861. The women’s father, “Captain” Bertram O’Farrell, settled here around 1879 and he married their mother Lulu Mae Dollar, the daughter of prominent Fort Dodge farm family, in 1909. The captain operated the large, canopied motor launch “Iona” for at least 40 years on West Lake Okoboji. Until his retirement and the boat’s dismantlement in 1936, Bertram maintained regular passenger schedules and hosted spectacular sunset rides.

A hand-written history of the lakes area, carefully  recorded by Captain O’Farrell in a hard-bound railroad ledger, has been missing since 1978. Family members anxiously hope for its return.

The restaurant’s lease lapsed in 1959, and Edna Mae had a new place built where the first restaurant’s chicken brooder house had overlooked Smith’s Bay. By that time , one sister, Arlene Henderson, had already moved to Florida, and the third sister, Fern Anderson, had died.

Only breakfasts and lunches were served at 1961, and by 1976, Edna Mae Cooper began serving a fourth generation of enthusiastic customers. She served the restaurant’s popular pies, homemade soups, sweet rolls, hamburgers and other sandwiches to its customers until her death in 1978.

The three sisters had no daughters in this area to take their placeless at the restaurant, but the four daughter of their brother Charles (“Chuck”) were willing to pick up the pothlodlers. O’Farrell Sisters continues to flourish today with three of those nieces, Joyce Gapinski, Charlotte Sarbie and Cheri Petersen. Their fourth sister, JoAnn Anderson, died unexpectedly in 1997. T

The restaurant’s “No Pie Before 11 a.m. Rule” was instituted in 1979, when the new generation of owners noticed that early morning customers were exhausting their supplies of freshly-baked pies before the lunch crowds could be served. According the local historian Steve Kennedy, one summer resident, who was a highly recognized corporate executive when he was away from the lake, was “chewed out” when he asked for a pie before eleven. He said, “All right, I’ll wait, ” and he sat there and waited for an hour for a piece of pie.”

Last summer, Arnlene Henderson, one of the original owners, made an annual visit tot he lakes from her home in Tallahassee, Florida. While here, she attended the school reunion of Arnolds Park High School, where she and one other classmate represented the Class of 1935. Quite expectedly, Arlene also found time to head for the kitchen at O’Farrell Sisters, where she rolled up her sleeves and went to work.

Lulu Mae O’Farrell’s secret recipe for buttermilk pancakes is still prepared by her granddaughters at the restaurant today, and it remains a secret. The most popular pies continue to be banana cream and coconut cream, although they are followed closely by chocolate and butterscotch. The bright blue lake once navigated by their grandfather continues to lap at the nearby shoreline as a second generation of O’Farrell sisters carries on a proud family tradition.